There are far too many attractions in and around the english riviera to list so we have included a link to the English Riviera Attractions page however we have mention a few of our favourites below to give you a good feel for some of the amazing places there are to visit.

Babbacombe Model Village
The model village is a world of miniature wonders which will intrigue children and adults alike. Although there are the usual quaint and historical areas of the village much of it is topical and is continually being revised and updated. There are elements of humour in many of the exhibits mostly subtle but sometimes not so subtle. Charlie usually ends in hysterics when he spots the streaker at the football ground......

The Model village never misses an opportunity to celebrate and lay on something special for the visitors. During the summer you see the spectacular illuminations and if you get a return pass so can see it all in daylight then return when it gets dark to see the illuminations in all their splendour.

Halloween brings the ghosts, ghouls and giant spiders. You can take the candle lit tour of the hidden areas of the village and hear all the spooky tales from the scariest of tour guides.

At Christmas you can visit Santa in his grotto and he may give you an early Christmas present. The rest of the village looks spectacular because whatever the weather - on the other side of the wall it always snows at Christmas in the Model Village.

The Cliff Railway is open every day during the summer season until early evening; a ship’s bell is rung 30 minutes before the last ride of the day. The cars run continuously so you never have to wait more than a few minutes.

Both return and single tickets are available so you can always walk off your breakfast in the morning then come back up in style after a hard day at the beach.

Kents Cavern
With its outstanding geological features, is one of the oldest recognisable human dwellings in Britain. Prehistoric human and animal remains and Bronze Age pottery and weapons have been excavated, including the oldest human jawbone in Europe.

The Cave offers great guided tours which are both informative, interesting and a little spooky especially when the lights go out! There's usually activities in the learning centre and regular theatre productions held in the caverns themselves.

Paignton Zoo
Paignton Zoo is one of the worlds leading conservation zoos. It is set in a mature wooded valley and is like no other zoo we have ever visited. The enclosures are expansive and unobtrusive as they have used the woodland and geography to create them giving the animals a much more natural habitat.

The zoo is not only outstanding in the diversity of the species which live there but also because it is more like a 'walking' safari park. The keepers give regular talks on all the species which not only cover the animals but also the conservation efforts that go with them.

You will need at least 3 hours but could spend all day there without seeing everything.

Pennywell Farm
An educational farm designed with kids in mind. Here the children (and you) can learn about, stroke, feed and ride all of the animals on the farm, from ducks and rabbits to the mighty shire horses. You might even spot the odd reindeer.

Our kids favourite is bottle feeding the miniature piglets. Its not just animals either. There's activities and exhibitions for all the family and you may even pick the winner of the piglet grand national!

Woodlands
Woodlands is a theme park set in the rolling countryside of the South Hams. Whilst it is not Alton Towers there are plentiful rides and activities to keep the children amused and all included in the entrance fee. Along with the theme park there is also a fairly sizeable farm park with the usual goats and sheep to alpacas and even a reptile house.

If the weather is wet they also have the South West's largest indoor play area which even includes some (smallish) fairground rides. As its name suggests it is set in mature woodland and rolling countryside so whilst it is aimed at the younger generation it is also a very pleasant walk around for parents and adults. 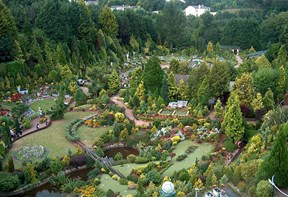