Torbay has 4 main theatres all of which provide a varied range of high quality productions produced both in house and from the most popular travelling companies and artists.

You can book direct with any of these establishments however we are only to happy to book on your behalf. We are able to secure generous discounts for our guests for many theatre productions at Babbacombe Theatre, and they are always willing to allocate the best available seats to suit your requirements.

Babbacombe Theatre
This is a 600 seat theatre located 150m from us at the start of Babbacombe Downs. The theatre looks deceptively small from the outside. It is a friendly intimate theatre with almost the whole of the ground floor taken up by stage and auditorium. Don’t be fooled by its appearance though as it has staged some of the biggest names in British entertainment. During the summer months it hosts its in house variety show on Tuesdays and Wednesdays which contain a wide variety of acts from comedians and magicians to song and dance troops. On Thursdays they host the songs from the musicals evening with talented singers performing all your favourites from the West End shows.

During the winter months they again perform another in house variety production but this has an altogether more Festive feel.

At weekends throughout the year there is a full programme of productions and all your favourite stars.

The Little Theatre
The Little Theatre is a converted church less than 5 minutes drive from Babbacombe on the edge of Daddyhole Plain. It is managed and manned by Torbay Amateur Dramatic Society (TOADS). Although an amateur company they perform to an exceptionally high standard and are generally as slick and polished as any professional production. They put on more than a dozen different productions each year and there is a wide range of both classic and contemporary shows to suit all tastes.

Princess Theatre
Princess Theatre is Torquays largest theatre and is located 2 miles away from us on Torquay seafront just past the harbour. It hosts all the biggest shows, comedians and music acts Britain has to offer. From Starlight Express and Jimmy Carr to Mumford and Sons and the Royal Marines Brass Band. With such a diversity of shows there will always be something for everyone and we shouldn’t forget the the kids (and some adults) favourite Festive seaside panto.

Palace Theatre, Paignton
The Palace Theatre is 20 minutes drive away just off Paignton seafront. Smaller than the Princess Theatre, The Palace tends to attract a more eclectic mix of productions from alternative comedians to classic Agatha Christie thrillers. Again another panto goers 'must visit'. 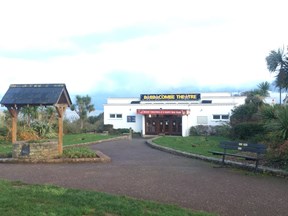